Idaho Falls, Idaho – June 27, 2018 – The 26th Melaleuca Freedom Celebration, which is the largest Independence Day fireworks show west of the Mississippi River, is sure to dazzle spectators with high-flying shells, cutting-edge special effects, and artistic choreography. Synchronizing patriotic messages, inspiring music and several tons of awe-inspiring fireworks, this inspirational event honors the brave men and women who have given their all for our country.

Starting at 10 p.m., spectators will feel the ground shake while over 10 shells per second explode for 31 minutes in the skies over the beautiful Snake River. Located in the picturesque city of Idaho Falls, the Melaleuca Freedom Celebration packs more firepower than any Fourth of July fireworks show held in the 22 states west of the Mississippi River, including those in San Francisco, Los Angeles, Seattle, Portland, Dallas, Houston, Phoenix, and Denver. It will also launch more fireworks than the prestigious shows in Boston and Philadelphia.

This year’s show incorporates many exhilarating special effects that have never been seen in the western United States. It also continues the tradition established last year of having twice the firepower of any show ever produced in Idaho prior to last year.

Creating one of the best fireworks shows in America has been a quarter-century passion for Melaleuca CEO Frank VanderSloot.

“Our approach to creating one of the best fireworks shows in the country is to use the night sky above the Snake River as our canvas,” VanderSloot explains. “This year, we’ll paint the entire sky, from top to bottom, using every color of the rainbow. Our producers have scouted the top competitions around the world and have selected the most distinctive, vibrant and intense products for this show.”

Last year, Idahoans were astounded by the tremendous financial resources that Snake River Landing invested into building a world-class fireworks venue, including an elevated launch pad that is twice as long as a football field. This allows the pyrotechnicians to rocket fireworks across the entirety of the sky, breaking wider than ever before and causing the audience to feel like they are watching fireworks in a widescreen theatre.

“We designed the 2018 Melaleuca Freedom Celebration to maximize the site’s remarkable natural amphitheater on the Snake River, take advantage of an expansive launch pad and elevate the entirety of the show,” VanderSloot says.
The show is famous for artistically choreographing one-of-a-kind patriotic pyrotechnics with an emotional soundtrack provided by Melaleuca and KLCE. This year’s fireworks display will feature a series of crescendos, peaks and a grand finale that the show’s creators say you will never forget.

To get the best view, spectators should sit directly west of the fireworks launch pad. For that reason, Snake River Landing planted more than 70 acres of grass last year for the audience to have plenty of space to spread out while having the perfect spot to see the fireworks.

To precisely coordinate fireworks with a musical soundtrack, Melaleuca uses the most sophisticated firing system in existence. The wireless firing system accurately synchs bursting fireworks within one one-hundredth of a second to the beats of music. The split-second technology has been used at the Olympics, elite firework competitions and the world’s top displays.

Spectators at Snake River Landing will listen to the program over a network of 100 speakers that Melaleuca purchased exclusively for this event. The musical program is broadcast live on KLCE Classy 97.3.

The purpose of the celebration, says VanderSloot, is to honor the sacrifice of our nation’s veterans and soldiers, as well as their families. Melaleuca hopes the event reminds us that the freedoms we enjoy every day have come at a tremendous cost, and we should not forget how we became a free nation.

“We are celebrating liberty while remembering the tremendous price paid by men and women who we’ll never know and whose stories will never be told,” VanderSloot said. “Their lives were cut short because of their sacrifice for us. We just want to use these 31 minutes to tell them thank you.”

Melaleuca, a manufacturer of health and wellness products headquartered in Idaho Falls, adds to the show’s budget each year to ensure it remains the largest show west of the Mississippi on Independence Day.

The show is produced by Western Display Fireworks, a fifth-generation pyrotechnics company in Canby, Oregon, that Melaleuca has hired ever since founding the event. As the largest fireworks company in the Northwest, Western Display has produced more than 10,000 shows since 1948, putting on roughly 350 shows each year.
Visit www.freedomcelebration.com for more information. 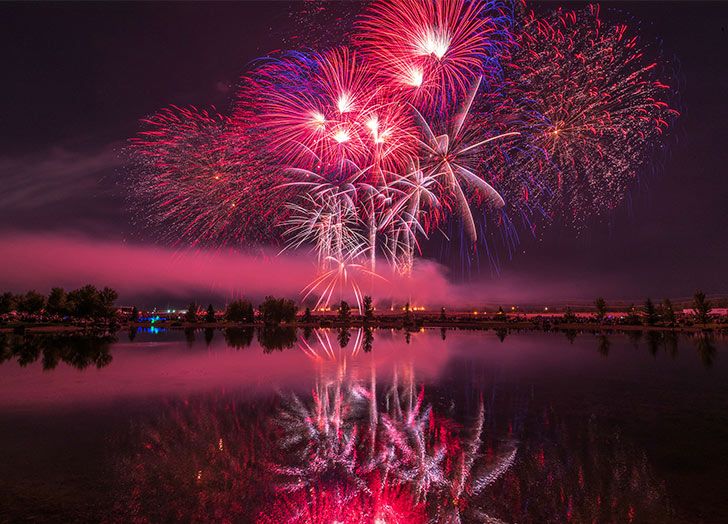